About the Australian Opal

What is opalescence? How are opals formed? If you have an interest in Australian opals, you’ve come to the right place. Here, our mission is to separate fact from hearsay and investigate myths and legends about the Australian opal. We aim to provide simple, honest, accurate and helpful information.

It’s difficult to put the allure of an Australian opal into words. When you gaze deeply into a fine opal for the first time, you are transfixed by an alternate reality of forms, colours and light. Turn the stone a little and you are captivated by the fascinating play-of-colour and an apparent depth of field that seems inexplicable when you turn the opal on its side. It is a unique experience. No two opals are alike.

“Fire of the Desert” 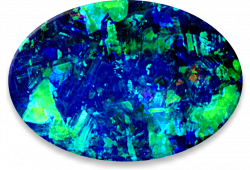 Created when a rainbow touched the earth.

Ancient Greeks and Romans were beguiled by the symphonic displays of light and colour. Was it alchemy? It wasn’t until the invention of the electron-microscope in the 1960’s that we began to fully appreciate the nature of opalescence.

In an era before science, people throughout the ancient world believed that opals were imbued with supernatural powers and virtues. According to indigenous Australian folklore, opals – the fire of the desert – were created when a rainbow touched the earth. It should, therefore, come as no surprise to learn that the opal is Australia’s national gemstone[1].

A great deal of research went into the development of this website. Yet, there will always be issues related to opals that we will be unable to explain with absolute certainty.  Even the origin of the word ‘opal’ is contentious. Does it derive from the Roman term opalus, the Greek term opallios or the the Sanskrit term úpala? A strong case can be made that the Roman term predates the Greek term. Therefore, it’s likely that opalus. was the root term for opallios. But was the Roman term derived from úpala, the Sanskrit term?  Opinions vary.

What remains certain is that Australia produces the finest opals in the world, stones of a quality that would have blown away anybody in the ancient world. 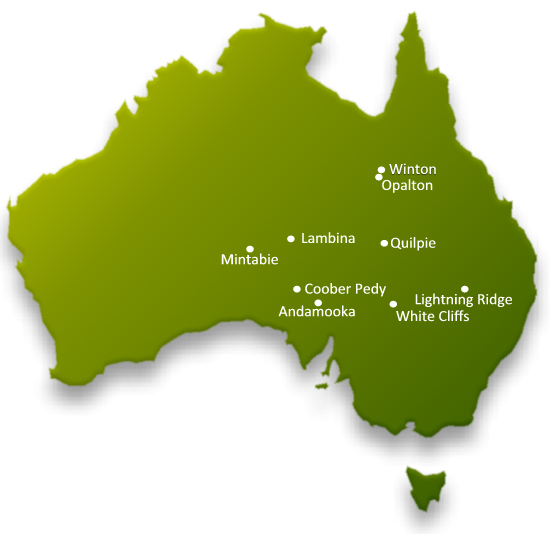 Australian government sources (and others) have estimated that 95-97 percent of the global precious opal supply (including the world’s finest opals) is sourced from Australia[1][3] and that eighty percent of that supply originates from South Australia (the home of the white opal). However, opals are also mined in New South Wales (the home of the spectacular black opal) and in Queensland (the home of the boulder opal).

Apart from its incredible beauty and brilliance, Australian opals are highly regarded for their stability. They are far less likely to be unstable than opals found elsewhere in the world. In other countries opals are  associated with volcanic activity and have a high water content that promotes instability. Unstable opals are more likely to crack or craze, and as opals have very little inherent colour, they rely upon light to reveal a play-of-colour across groups of planes formed by microscopic opal spheres.their

Opal Miners are a Special Breed

Miners live and work in remote areas and extreme climates. Folklore abounds about opal miners and the other characters to be encountered at the opal fields, some of it the stuff of legends. However, legends grow and become embellished in the retelling, so sorting fact from fiction can be quite a challenge. Just as indigenous Australian culture and folklore has been handed down in the form of oral narratives, much of the early history of opal mining remains unwritten.

Most miners are eternally optimistic – tomorrow may bring a great discovery, a big win. They are gamblers. In fact, when they’re not working, many can found playing high stakes poker – there isn’t much else to do during downtime in the outback. But miners wager much more than money – opal mining can be a very dangerous business.

What distinguishes opal miners from the rest is the deep reverence for opals that most develop. After the initial thrill of a great find, there will follow a moment of quite intimacy as the miner stares into an opal, fascinated by its beauty, play-of-colour and uniqueness. Each discovery is a new experience.

It will surprise many to know that Australia’s outback, community of opal miners is incredibly diverse. Miners from Anglo Saxon, Eastern European, Western European, Mediterranean, Asian and Indigenous Australian backgrounds can be found living and working alongside one another in the most remote opal fields

A Brief History of Opal Mining in Australia

Opal mining commenced as a frontier industry, as did the Australian Gold mining industry during the great gold rush of the nineteenth century. However, in many respects opal mining remains much the same today. It is one of the few commercial mining operations that can be undertaken by a miner, working alone, using little more than a shovel, pick and explosives. Today, some mining operations are mechanised, but as one old timer pointed out: “where can you find parts for that bloody thing out here”.

Is opal a gemstone?
How opals are formed
What is opalescence?
Opal nomenclature
Gemmological properties

This website uses cookies to improve your experience while you navigate through the website. Out of these cookies, the cookies that are categorized as necessary are stored on your browser as they are essential for the working of basic functionalities of the website. We also use third-party cookies that help us analyze and understand how you use this website. These cookies will be stored in your browser only with your consent. You also have the option to opt-out of these cookies. But opting out of some of these cookies may have an effect on your browsing experience.
Necessary Always Enabled
Necessary cookies are absolutely essential for the website to function properly. This category only includes cookies that ensures basic functionalities and security features of the website. These cookies do not store any personal information.
Non-necessary
Any cookies that may not be particularly necessary for the website to function and is used specifically to collect user personal data via analytics, ads, other embedded contents are termed as non-necessary cookies. It is mandatory to procure user consent prior to running these cookies on your website.
SAVE & ACCEPT
Scroll to Top